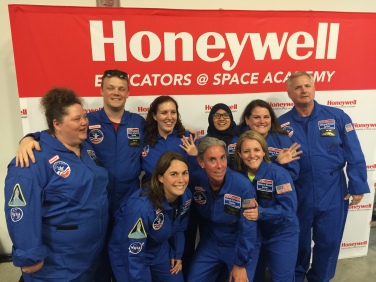 Incredible is an understatement.  I am pinching myself…..how did I get here?  The day started with information on our jam packed one-week agenda.  We received space suits the night before along with a bunch of other Honeywell “swag”! Introductions of the staff were made along with assignments of teams, each named after an ISS module.  Our team name: HARMONY.

Our first presenter, Ed Buckbee @RealSpaceCowboy has been a part of the U.S. space program for four decades.  He started in 1959 when America’s first Mercury astronauts were selected and attended launches of Alan Sheppard and John Glenn.  He was present for the Mercury, Gemini and Apollo missions.

His book, The Real Space Cowboys, touches on the lives of the early astronauts and the time in history where the  “race to the moon” was a hot topic.  Buckbee showed us a lot of really neat old videos, many from the moon landings.  Twelve U.S astronauts have walked on the moon and there have been 8 landings of rovers and probes on Mars.  Nine-hundred astronauts have been launched in space in the past 5 decades.  The space history that I learned today and once I read Mr. Buckbee’s book will only enhance the way I present the different projects I plan to implement this year.  Students need to know the “why” and the “how”.  I like the idea of incorporating history lessons into my units as a cross-curricular project. 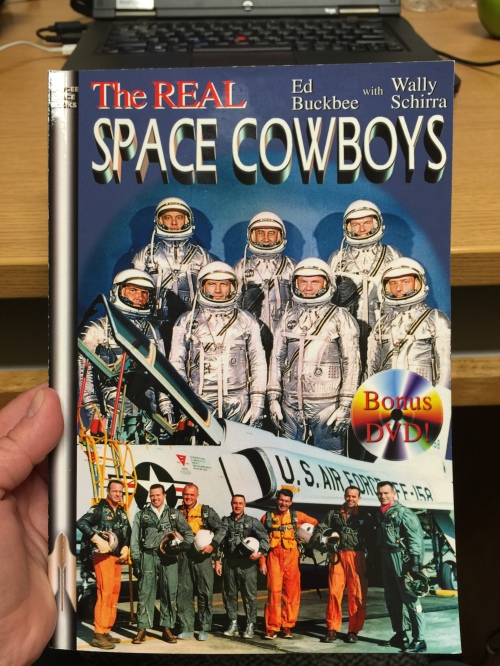 The afternoon sessions were very exciting!  After lunch we had a presentation on flight hardware and engine components.  I found it fascinating to learn the anatomy of a rocket with capsules for the crew, payloads and fuel.  One of the main things that I will take away from this 1-hour session is the information provided about solid, liquid and hypergolic (mixed) fuel.  I can see myself adapting this information into a demonstration for my phase change unit at the beginning of the year or exothermic reaction unit later in chemistry.

This first video demonstrates a solid propellant.  Solid propellants give off a lot of energy and therefore a lot of thrust for a rocket but you cannot control this reaction.

This last video demonstrates a hypergolic propellant which is unique because it does not need an igniter, just an interaction between the reactants to start the reaction.  You would think this type of reaction would be the best out of three but hypergolic propellants are difficult to handle and are extremely toxic.

Our final presenter of the day was Astronaut Robert (Hoot) Gibson.  As a former Navy pilot and trained aeronautical engineer, “Hoot” led 5 shuttle missions, 1 as pilot and 4 as commander.  One of his “firsts” in space was docking the Atlantis shuttle at the Russian space station, MIR.

I learned a great deal from his talk that I will take back into my classroom. It takes the shuttle 8.5 minutes to enter orbit travelling around 17,500 mph.

Astronauts in the shuttle complete an orbit every 90 minutes so 45 minutes of sunlight for recharging batteries and 45 minutes of darkness. 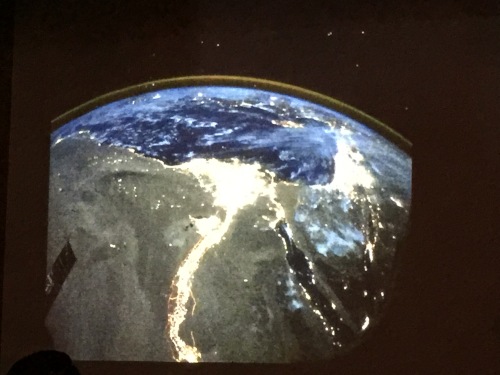 Night views over the Nile River delta and northern Africa.

This was my first time meeting an astronaut. I asked him about medical issues that one may experience after completing a mission in space.  He said that your first problem in zero G’s is the fluids in your body.  Your face may swell and your sinuses will act up.  You tend to lose 8 pounds in zero G’s and your body stretches (no pressure on your vertebrae).  For longer stays on the ISS for example, you can potentially lose .5 to 1.5% of your bone calcium.  Some astronauts have to go through rehabilitation because of brittle bones.  You can also experience critical back muscle loss that could be a serious issue.  This information is important to relay back to students.  Class discussions could evolve into, “why would one want to put their health at risk?” or “what would happen if we do make it to Mars?” 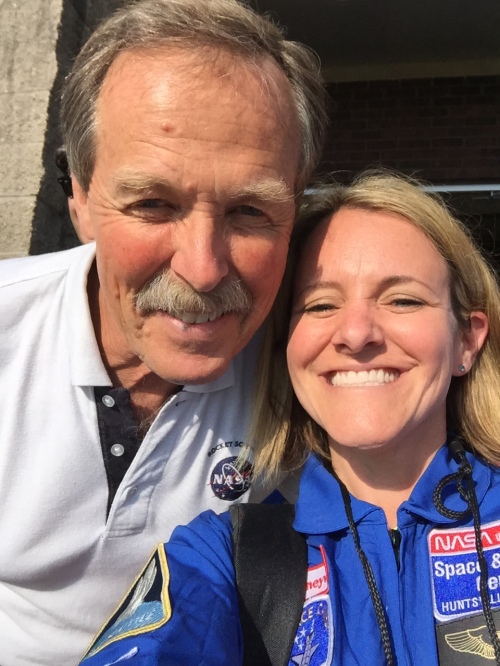 Overall, my day was packed full of excitement and learning.  Tomorrow our team will participate in a low ropes course, aviation challenge water survival and a mission training.  Stay tuned!!!