Another incredible day!  We started with an activity that I really want to use in my own classroom.  It is called the Thermal Design Challenge.  Our task was to explore how heat is transferred, examine how NASA’s previous Thermal Protection Systems protected spacecraft and build an ablative shield to protect our “egg-stronaut” from the heat of a mock “re-entry”.  The idea behind an ablative shield is that the outer surface turns white hot, chars, and flakes away taking the heat with it.  The challenge involved protecting an egg from white-hot temperatures.  Each team needed to stay below the 100 credit max.  Each type of material (ex: cotton balls, large steel, pasta, spackle, cork, aluminum foil, paper) was priced out.  We needed to brainstorm, draw a design, and keep the model no wider than a pencil.  Here is a picture of our set-up. You will have to watch the video to see if it worked! 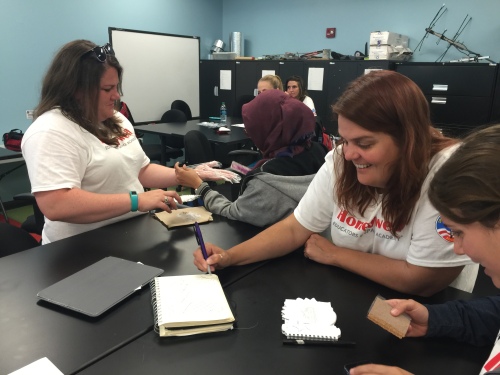 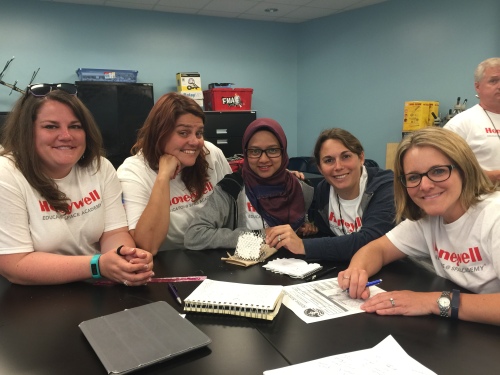 What I really liked about this activity was that even though our shield was an epic fail, I wanted to do it again; I wanted to improve our design. I think students may have a similar mindset and if I can allow enough time in my schedule, I would let them try again. What an amazing activity that shows true engineering at work!

After that competitive activity, we jumped right into our second mission of the week.  This time we were headed to moon in the year 2055.  A Shackleton control center as well as the Rising Star research station were habitable but the research station Aurora was in need of repair (broken windows and fire with the circuitry).  Six members of team Harmony were in the Operations control center, two members piloted the Orion spacecraft that was orbiting the moon, four took the spacecraft, Altair, to the moon’s surface to relieve the two astronauts in the Rising Star research station.  Those two astronauts could switch places and head back to the orbiting Orion via Altair.  Complicated, I know.

I had a different job this time compared to our first mission.  This time I was a lunar specialist in the Rising Star station. This was a lot of fun. 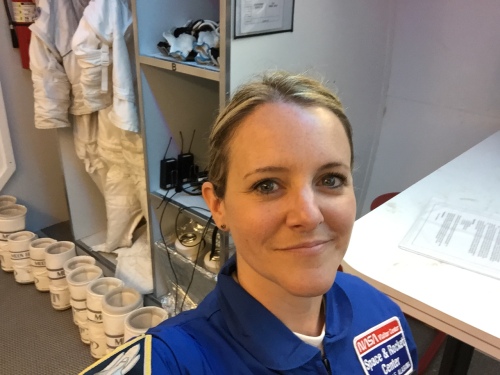 I started the mission by performing some pre-EVA medical evaluations like real astronauts do before their EVA’s (Extra Vehicular Activity or “space walk”).  I needed to take my temperature, pulse and blood pressure before I got suited up. 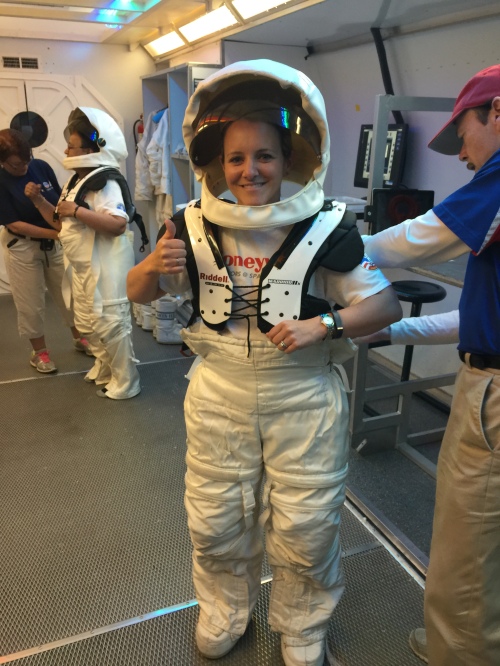 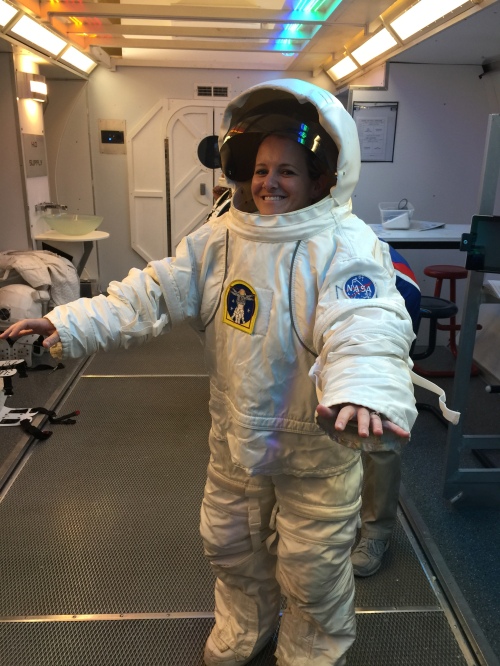 After our pre-assessment, we ventured outside Rising Star to check oxygen and nitrogen tanks.  If they were too low, we needed to change them by unscrewing the hoses from the tanks and replacing them.  We also needed to check the batteries and wires, and replaced where needed.  Last, we needed to obtain a USB from a rover that was taking pictures along the surface.

Our last task, before Orion brought the new team in, was to build a solar panel system.  This was so awesome.  We were hooked up to a ballast that filled with water to counteract our weight.  One little push and I was sailing towards the top of the tower.  Unfortunately, I did not get video but you can imagine from the pictures.

Notice the “solar panals” on the bottom left that I already assembled. 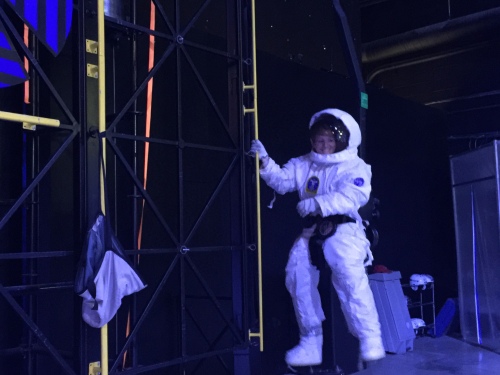 A swap out with the new crew, led us to Altair and off of the moon to the orbiting Orion. This activity, again, was heavy on the teamwork.  The relief crew was late so when we boarded the Altair capsule, we were behind on the clock.  I panicked a little because we lost our ability to connect with Orion, but it worked out in the end.  Again, a strong reminder that it takes a team to make any of these missions happen.

Team Harmony at the end of the second mission.

After lunch we ventured to another activity called “X-Prize”. The “real” Google Lunar X-Prize was started in 2007.  The first privately-funded team to send a robot to the moon wins $20,000,000!  In order to win, the team must: successfully launch, land on the moon, rove 500 meters, and then transmit back images and video.  WE DIDN’T DO THIS COMPETITION!

Ours was titled, Payload Operations L.U.N.A.R. (Landing Unique Navigable, Astronaut-Driven Rovers).  Our objective was the get our payload (which was our “egg-stronaut”) to land as close as possible to a target from high up without damaging the rovers function and then travel down a ramp to mimic driving on the planet.  A credit limit of 100 credits was set.  Chosen materials were categorized based on how many credits they were assigned.

Team Harmony blew everyone else out of the water in this activity. We were on cloud 9!!

The last activity I will discuss happened on Day 5 but I am going to leave that blog post to graduation and reflections!

The final activity was called ECLSS (Environmental Control and Life Support Systems). The task was to mimic what happens aboard the ISS. Water and Oxygen need to be pumped back into the system, while CO2 and other waste products need to get pulled out.

Our task was to take (what looked like) urine and create a filtration system to obtain pure water that was drinkable. It needed to end with a pH of 7, be low on conductivity and be an efficient system meaning it needed to reclaim a lot of that liquid in milliliters! As usual, this activity had a credit budget and items (such as ammonium chips, lima beans, empty water bottle, plastic funnel, charcoal, cheesecloth, coffee filter, sand, gravel) were assigned a certain amount of credits. To take it even further, you could add a clarity scale. Here are some pictures of set up and a video of a good filtration system, and then I will discuss ours. 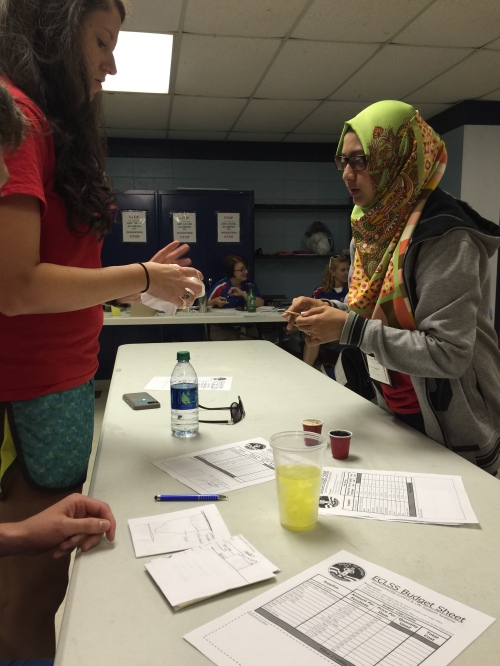 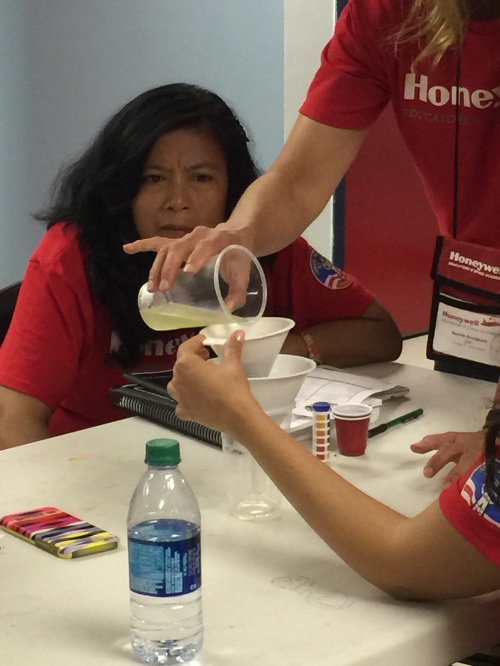 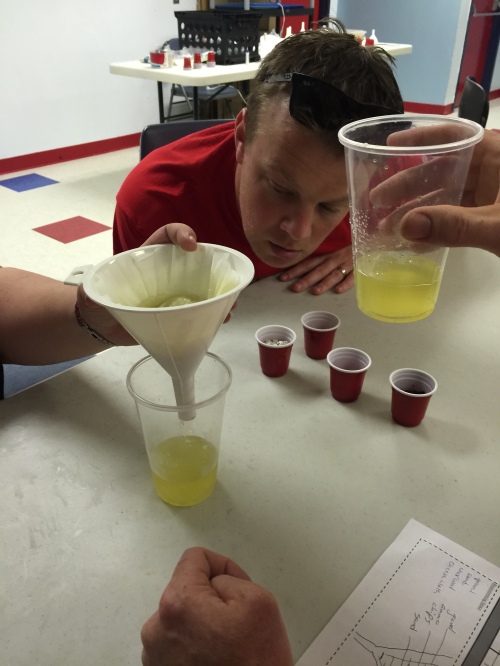 This activity was a great learning experience and I definitely want to do this in my classroom for a mixtures unit. Not having a good experience (by the way our “urine” turned black because we messed up and dumped some charcoal into our sample, don’t ask!) was ok. We learned from our mistakes and wanted to do it again, something I hope my students would say to. Understanding this environmental system helps students see that it’s pretty dangerous on the ISS and if anything goes wrong, it could lead to death.

Stay tuned for my final reflection on Day 5!  We graduated and I will be taking so much home from this program!